Indonesia has one of the richest biodiversity in the whole world. There are at least 515 species of mammals, 1400 species of freshwater fishes, 121 species of butterflies, 511 species of reptiles, and many others. However, not every species managed to survive to the modern day, and today we will try and see some of the endangered species in Indonesia.

Indonesia as a whole has been facing an apparent problem of deforestation that disrupts the survivability of the endangered species there. Among many places suffering from the deforestation, Sumatra has suffered the most and lost around 65% of their rainforest. With the loss of the rainforest, the unique tigers that live there are also trying their hardest to survive—even though they are already facing a hard time with poaching that has been a problem from the start.

Just like the tigers, the rhinoceroses in Sumatra are also facing the poaching problem. What makes this rhinoceroses different from the other rhinos is the reddish-brown hair that covers their entire body. They are also considered one of the smallest rhinoceros species. What makes Sumatran Rhinoceros become an endangered species is because their horn could be sold for around $27,000 per pound.

Monitor lizards are also known as biawak, and this certain species of biawak is endemic to Batanta Island in Raja Ampat, northwest of West Papua. They have unique and beautiful blue patterns and can grow to 1 meter. Just like the Sumatran Rhino, these lizards became an endangered species because one of them could sell for around $1.000 and even more. Just around 2003 to 2013 alone, there are at least 3.000 of them being exported.

Tapanuli Orangutan is a comparatively new species as they were classified in 2017 as a species distinct from the Sumatran Orangutan. This species of orangutan live—or lived—in a mountainous forest range south of Lake Toba in North Sumatra. This species became an endangered species because many palm oil producers are killing the mothers by shooting them or using machetes. Then, they would capture the baby and try to sell them.

This species of rhino is different from the Sumatran one as their females have no horn, while the males have a small single horn. They used to be a common species in Southeast Asia, but nowadays they could only exist in Ujung Kulon, at the southwest tip of Java. They became an endangered species because they were hunted for their small horns that sold for a high prize in China. However, ever since the 1990s, there have been no reports of poaching of Java Rhino. 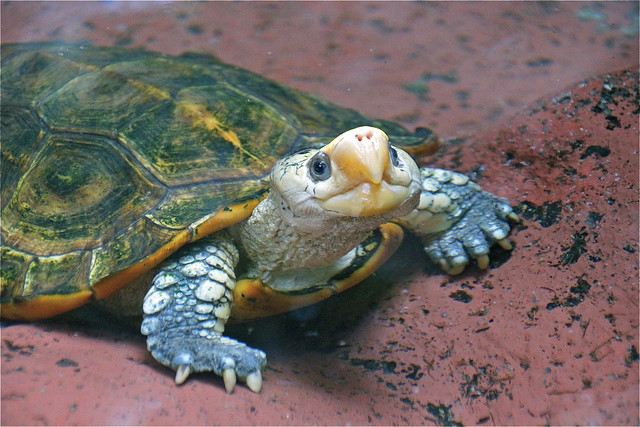 Also known as the parrot turtle because of their beak-like mouth, this species is endemic to Sulawesi. This particular species of turtle could grow up to 30 cm, but their habitat has long since gone because of the deforestation. However, what made them into an endangered species is because throughout the 1990s, around 3.000 of them were exported annually to China as a delicacy and to Europe and America as exotic pets.