Around this week, the United States will be celebrating one of their most beloved holidays: Thanksgiving. But what is Thanksgiving? Essentially, it is a holiday in which family gathers together and be thankful for many things.

While we in Indonesia has no history of celebrating Thanksgiving in any ways, it is a good idea to learn the spirit and history of Thanksgiving; to be reminded of what we are thankful for, be it the small things to the big things.

The Story Behind Thanksgiving

The history of Thanksgiving dates back far to 1621. Back then, a group of pilgrims from England was sharing a feast with the people Wampanoag, a Native American tribe in Massachusetts to celebrate the result of a bountiful harvest. This first “Thanksgiving” was held in October for three days long. However, 2 years earlier, the same ceremonies were said to also be held somewhere in Virginia.

When the first Thanksgiving was held, it was supposed to be a festival done by the pilgrims. It began with some of them going out fowling for turkeys, ducks, or geese. They managed to hunt so many, it was said they could serve the whole pilgrims for a week. Suddenly, around 90 people of Wampanoag appeared on the settlement’s gate, startling the 50 or so pilgrims.

While it surprised the pilgrims, the appearance of Wampanoag people actually contributed a very big part in the history of Thanksgiving. They were the one that brought fish, stews, vegetables, and many other sea produces. Since then, the relationship between the Pilgrims and the Wampanoag was peaceful, at least until a war broke out in 1675 to 1676.

Thanksgiving was never a national holiday until the 3rd of October 1863, when Lincoln proclaimed that November 26 should be a national day of thanksgiving. Thereafter, the holiday is annually proclaimed by almost every president. This changed when Franklin D. Roosevelt became the president. He issued a proclamation to make the fourth Thursday in November to be the day of Thanksgiving.

What Should You Do on Thanksgiving?

Thanksgiving has since become a moment for family to gather, especially with how busy the modern world is. In the late 1800, Thanksgiving was celebrated with a parade of costumed revelers. In 1924, the Macy’s parade in New York City was held with giant balloons.

In 1876 when football is still in its early days, Yale and Princeton played a game on Thanksgiving. This tradition is then continued later with thousands of football games taking place every year on the same day, making football games as another inseparable part of Thanksgiving.

What once started as a holiday for the English pilgrims and the people of Wampanoag to be thankful of their bountiful harvest, has now turned into a symbol of intercultural peace. It is now also a day to appreciate the family we have and be thankful for everything.

While Indonesia has no historical connection with Thanksgiving, we can still honor the history of Thanksgiving by doing fun activities with kids. One of the easiest things to do is to create a thank you tree.

To do this, you would need: 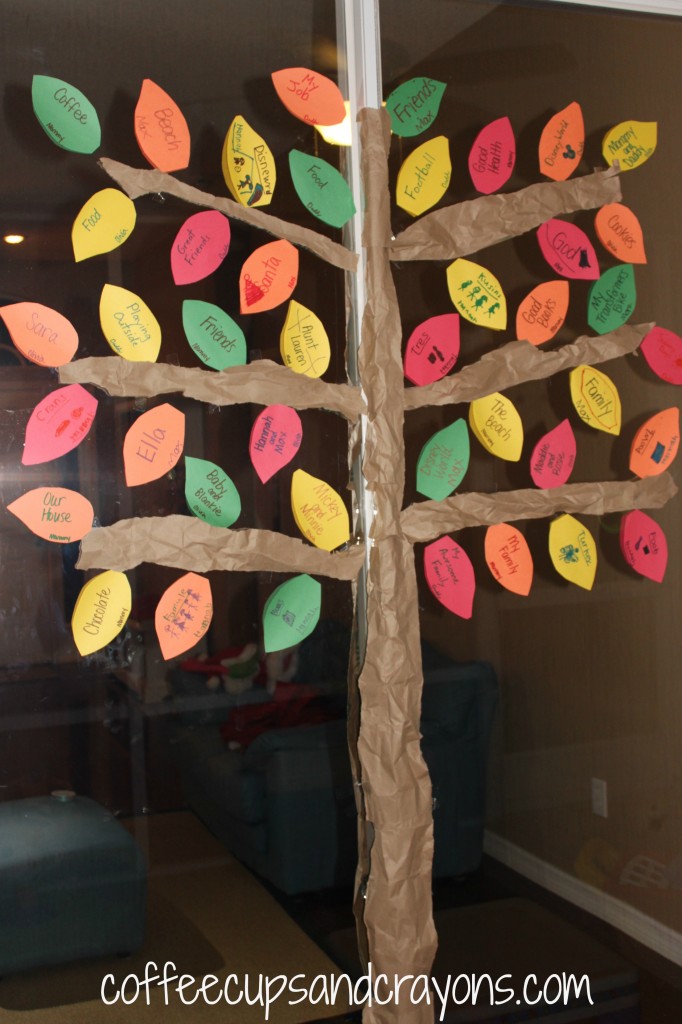 Thank you tree image from cofeecupsandcrayons.com

The first step is to tear the brown paper and scrunch them up. Roll them together until they look like the trunk of a tree. Create a few more rolls and use them as branches.

Once you are done with the tree, tape it into the window glass. Then, create leaves out from origami or colored papers, and tape it around the branches.

When you are finished, ask the kids to write down one thing they are thankful for or they would like to say thanks to.

By doing this activity with your kids, you are not only honoring the history of Thanksgiving, but also teaching your child to express their gratitude. And after doing a tiring activity such as this, there is no better way to end Thanksgiving by eating the dishes you have prepared beforehand together with the whole family.